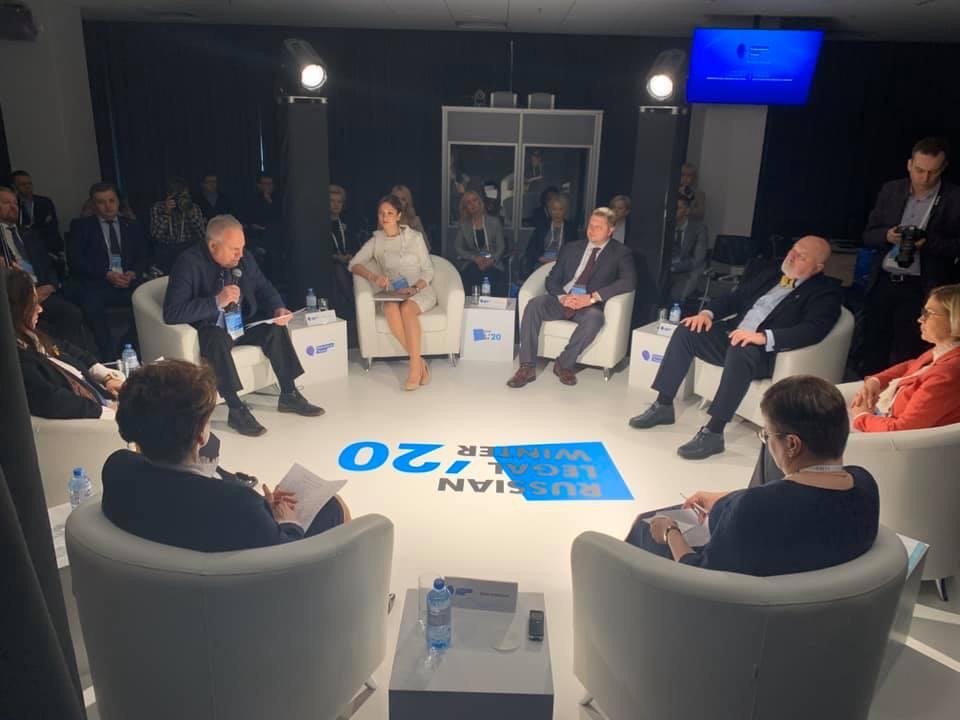 Advocates Bureau Yug became a strategic partner of the Civil Law Conference at the Research-to-Practice Conference dedicated to the memory of M.I. Kovalyov in Yekaterinburg

XVII International Research-to-Practice Conference Kovalyov Readings: ‘Legal reconciliation: compromise or concession?’ was hold in Yekaterinburg on February 13-14, 2020. The conference was recognized as an event for exchanging views between practicing lawyers and representatives of the scientific community, and for finding new business contacts.

The largest venue in Yekaterinburg was chosen this year — the Congress Center of the IEC Yekaterinburg-EXPO, and about 1200 people from 21 countries took part in the Kovalevsky readings. Among the speakers and honorув guests there was a galaxy of practicing lawyers, scientists and statesmen, judges of different countries, historians and philosophers.

The first day of the business program began with signing of a cooperation agreement between the Russian Federal Bar Association and The Union of criminalist and criminologist.

The major report ‘Reconciliation and Criminal law: unexploited opportunities’ was presented during a plenary discussion: ‘Legal reconciliation: compromise or concession?’

Joint Plenary session of the International Society of Criminology and the International Forum on Crime and Criminal Law in the Global Era (IFCCLGE) was hold on February 13th and dedicated to issues on the fight against transnational crime. Everyone agreed that nowadays it was the major priority of all states without exception. Moreover, international Criminology has the scope of research that goes beyond legal studies and covers a number of other spheres, unrelated to the law. In order to create appropriate tools for reconciliation, all states shall come to an understanding of causes of crime, possible changes of crime in the near future and personality of present-day and future criminals.

The second day of the Conference on February 14th began with the following parallel panel discussions: ‘The price of state forgiveness: liability or redress?’, ‘Mediation and its potential in criminal law, criminal procedure and execution of punishment’, ‘Attorney, notary, arbitrator and judicial mediator: effective techniques, strategies and competencies’. Yuri Pustovit, the Managing partner of Advocates Bureau Yug took part in the last discussion. During his speech ‘What is the role of an attorney in the reconciliation process’ Yuri Pustovit talked about how reconciliation process looked in real practice. According to data for the first half of 2019, the percentage of cases that ended in a settlement agreement is negligible. There are several following reasons: firstly, it is cheap and quick to sue in Russia; secondly, the clients usually do not want reconciliation as in most case they believe their claims are legitimate and consider peaceful offering as a weakness; thirdly, lawyers do not always want reconciliation as they lack sufficient knowledge of the client’s business specificity, or they do not consider reconciliation to be beneficial in terms of royalties and marketing — successful representation in courts and instances costs more than reconciliation process and looks more favorable as news for website or SNS.

Exclusive off-site meeting of the Council of the Russian Federal Bar Association also took place on the second day.

The Conference ended with three parallel panel discussions: ‘What requirements does legal practice settle for legal education?, Sanctions: pursuit of peace and Real Estate Law: distinction of private and public interests’. During panel discussion on real estate Sergey Radchenko, Senior associate of Advocates Bureau Yug and Candidate of Law, spoke how to distinguish between public and private interests in the legal regulation of unauthorized construction. Norms on unauthorized construction are internally contradictory: on the one hand, creation of unauthorized construction is a public offense, on the other hand, it is one of the legal ways to acquire property rights.

It is possible to correctly distinguish between public and private interests in the field of unauthorized construction only if two difficulties — theoretical and practical — to be resolved. The theoretical difficulty is to determine whether an unauthorized construction is a thing or not. Practical difficulty is to determine whether this particular structure belongs to real estate or not.

Article 222 of the Civil Code has undergone three major reforms, but new norms should be added in order to balance public and private interests, such as: an equivalent of estoppel in the Civil Code, i.e. administrative estoppel; compulsory satisfaction of one of the claims in case of counterclaims for demolition and recognition of rights.