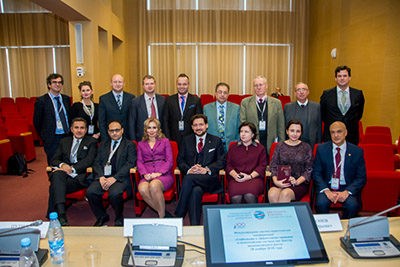 ABY Managing Partner Made a Speech at the V Global Forum of the Financial University.

On November 27-29, 2018, the Moscow Financial University under the Government of the Russian Federation became a discussion platform on changes in Russian and world economy, structural transformations of international trade and society’s development.

The memorable end of the first day was an open lecture by Jean Tirole, the French economist and Scientific Head of the Institute of Industrial Organization Theory under the Toulouse 1 University Capitole, the President of the Jean-Jacques Laffont Foundation under the Toulouse School of Economics, and Nobel Laureate in Economics (2014). Mr. Tirole mostly spoke on such issues as what it meant to be an economist, what was the common good, and how to achieve financial stability.

The second day of the Forum covered the issues of economic realities and nowadays problems, such as: income inequality, encouragement of private investment in the economy, technological prospects of the domestic industry, innovative entrepreneurship, a new industrial revolution, the research on the breakthrough trajectory in the economy, the strategies on innovation and technological breakthrough, methods attracting investment resources; creating an optimal cooperation model between legal and political systems, incentives to develop business in Russia amidst sanctions, trust and loyalty in credit relations, shadow banking, etc.

The participants discussed the impact of law and policy on development of the Russian economy: interaction of legal and national political systems in terms of globalisation, issues on creating an optimal cooperation model between legal and political systems; searching for optimal political and legal means to overcome obstacles during the state economic development; legal and political incentives to develop Russian and foreign business in the Russian Federation amidst sanctions; legal test on human potential for the state and society’s progress.

At the V Global Forum Yuri Pustovit, Managing partner of Advocates Bureau Yug, dedicated his speech "Stable and effective legal and political system as a factor of economic growth" to a complex and problematic topic of reforms in the Russia’s Civil Code, particularly, implementation and protection of civil rights, good faith and prohibition of abuse of rights. The conference with attendance of more than 70 the University’s professors and guests of the Forum became one of the most impressive and popular events.

Mikhail Eskindarov said in the interview with “Kommersant FM” that the Financial University under the Government of the Russian Federation, being an expert and analytical center, would use research and suggestions arisen during the Forum in its work and recommendations to the State Duma, the Federation Council and the Government.